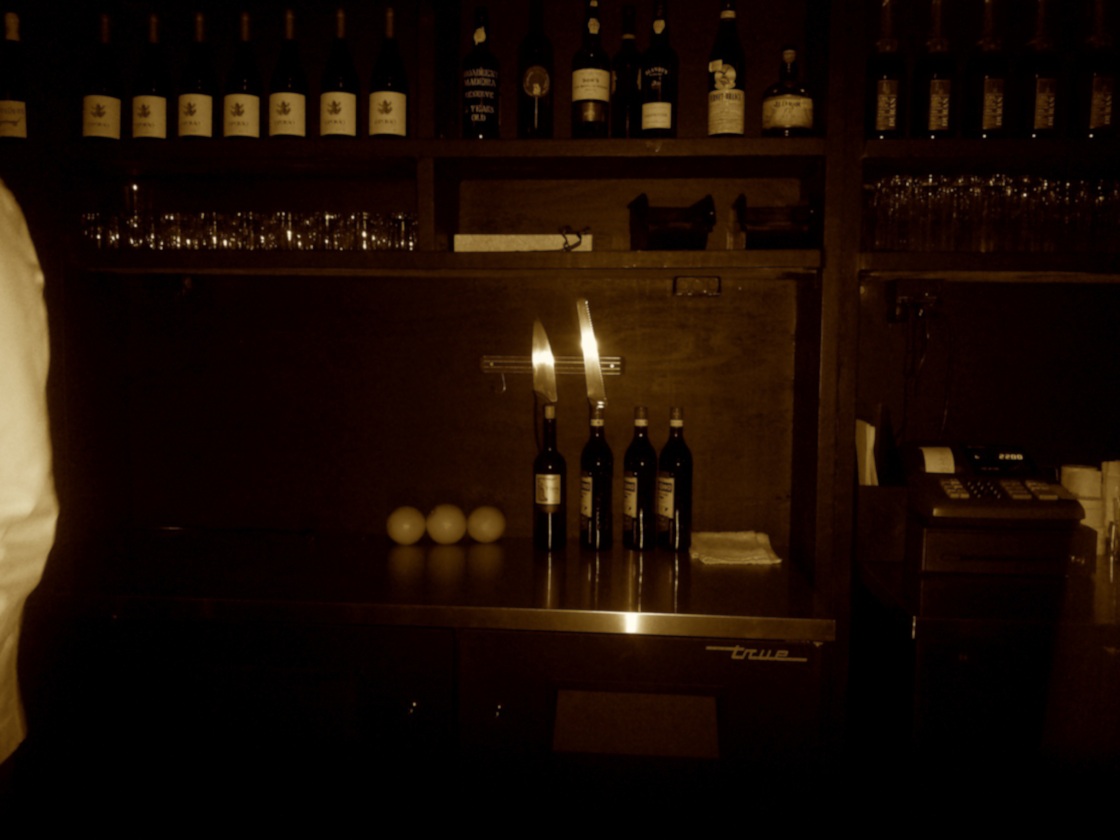 Peccadillo (n.)  a trifling or minor offense; from the Latin, peccare, ‘to sin’

In life, most things are defined by what they are not so that the chafe of negativity blemishes almost every definition.  A peccadillo is, in truth, a small sin – not one for the chipped steel of the penitentiary’s gates or St. Peter’s tiny notebook. It is neither mortal nor venial, but a sin, nonetheless.

Across from the Napa Auto Parts store, behind a grey door on a dead end street, Peccadillo beckons. Virginia sits by the door checking the membership list – the curtain behind her glows with a red light. Inside, the place is a simple rectangle – black with a cream stripe around three sides. The clientele are eclectic. Some come in Carhartt, others in kitchen clogs; both fresh off the line for cocktails, talk and mischief.  Still others come in bespoke, head to toe.  A beat from MC Lyte comes to mind here: Funky-fresh-dressed-to-impress-ready-to-party.  People in this place have been known to talk to strangers – the atmosphere is seriously promiscuous.  But, at Peccadillo, the possibility of a small forgiveness awaits you.

On the night that I happen to come in for the second time in a week, Etta James has passed. Friends and strangers open their conversations with “did you hear . . .” and like all people in the midst of that blinding predicament called fate, we gravitate toward being together. In this tiny corner of the triangle, she lives – singing the blues, throat wide open, mixing with the cocktails and the low chatter.  I am having a glass of Cava and following the movement behind the bar.  Fresh from NYC’s famed Employees Only by way of South Carolina, Tim Neill’s hybrid Australian/New Zealand accent and crisp white jacket take you back to an era when bars were sophisticated and courted their clientele like their wine list, one bottle at a time.

In a matter of weeks, bartender and partner-owner, Neill has turned Peccadillo into a destination.  Tim will serve you only 3 cocktails:  a Martini, a Manhattan and a Negroni.  In a country where variety is paramount, but at a cost, this can be a bit unnerving.  Neill’s tastes are herbaceous and the martini is simply one of the best I have ever had.  At the end of the night, I wanted to pick the piñon from my teeth.  Seriously.  The drink was chilled but not too much, a little dirty from the juice and arrived with a single bright green olive on the finish. Customers here will not have to survive another disappointing pimento-stuffed night.

Neill’s penchant for detail and educated palate will keep you coming back. Settle in with a bottle of wine shared with the people you’ve just met. Peccadillo’s wine list has the spare lines of a Vladimir Kagan design and is heavy on the Spanish influence.  But it changes weekly, so if you stick around, you might find yourself in another region altogether.  Nevertheless, if you’ve had the pleasure of spending any time in Spain, the back of your tongue will recognize soft tannins, mild minerals and fruity perfumes familiar to that special place. Drinks at 100a Brewer are neat, exquisitely sourced and prepared with what appears to be sleight of hand.

Later in the week, on yet another evening, the throng outside the front door is organized in a familiar smoker’s huddle.  A few UNC undergrads walking through the curve that connects Chapel Hill’s Franklin Street to Carrboro’s Main look down the road wondering what’s happening at the spot. They spy a loose assembly of folks from twenty-somethings to well . . . the officially retired. They move on.  This is no sports bar; you won’t find a TV in the place and the clients are glad for it. The music is just too good to warrant idle attention. As you sip Neill’s deadly fragrant kummel, you notice that one song preserves the slight crackle of a worn 45, taking you back in musical time.  At Peccadillo you feel as if Celia Cruz might actually show up, head encircled by the glow of that one red bulb.

At the end of the street, a woman stands on the corner across from the Taco truck, clutching a cell phone to her ear, cutting the cold with the warmth of her Droid.  “You have got to come to my favorite place to have cocktails.  It is like . . . the best bar ever.”  True that, but as she tries to explain how to get from there to here, she falters and offers to just wait on the corner for her friend’s car to arrive.  In that dress?  I think: good luck with that. We extinguish our refries and shuffle along through the metal door toward the warm light.

The flare of fire against the butt of a lemon rind captivates the trio to my right.  It is midnight and the joint is hopping. The chef du cuisine at a local restaurant shares a nice bottle of ’04 Tempranillo with me and we chat about pâtes.  It is the kind of place where you feel you can fall in love.  Not the love of your college years with more confusion than bliss, but the better love of your mid-to-late 30s: older, wiser and with a sense of humor.

The drinks flow and the laughter is real. The edges here are soft, keeping none of the metal and wire (even the staircase is gone) that was a punk rock venue called the “The Reservoir” – known in cyberspace reviews as “the diviest bar in Chapel Hill.”  As if to test my theory of past and present, hard and soft, on my way out I overhear Tim say “I won’t be happy until there is discarded clothing on the bar . . .” It could happen, because at least here – it’s only a small sin, a minor offense.

My cell phone chimes with the bling of an incoming text.  “Are you at the spot?” asks my foodie friend. I stop with my feet pointed toward my vehicle and spin ‘round. I cross the deserted street with one hand extended toward the door and the other texting, “Hell yeah.  Get over here.”